The Perception of Value, and the Value of Perception

As always, I thank those who've purchased "None of Our Hands Are Clean". I really pray you enjoy it, and it generates conversation. I thank God for this opportunity.

Recently, I had an acquaintance vociferously expect a free copy. The acquaintance didn't mean any harm, but it spoke to a level of familiarity that left me somewhat uncomfortable.

An interesting part of this journey is convincing some people I'm trying to run this as a business. To me, this isn't some school project where I'd want pats on the head or a passing grade.

As I market my novel, I'm trying to foster the perception that there's value in buying it, reading it, telling others about it, etc. I want my work to be worthwhile to readers, even as it challenges them in some way. We all understand on some level that the proper product price point influences what we think a consumable is worth.

In addition, I learn about myself when I value what others perceive in my work. Thanks to my editor Shelia Bell for reminding me not to tell my readers what to think as they read the story, understand the characters, and perhaps re-assess their own understanding of certain situations. My readers teach me as they provide feedback. Of course I have to be judicious in how I use that feedback, but it's a fascinating cycle. At least it's fascinating until I'm "in my feelings" one day, and constructive criticism pushes me to a big bowl of ice cream.

I've been telling folk all the while NOOHAC isn't a one-off effort. I definitely want this to be the first of numerous successful novels. I'm happy this effort forces me to engage a different part of my brain. I'm in this thing, but some large parts I cannot control.
Posted by Some Random Old Dude at 5:52 AM No comments:

So, Today I'm a Traveling Salesman...

This morning, I said a short prayer and headed out the door.

For decades, I told myself I didn't have what it took to be a salesman. From a distance, I'd always admired those persons who could cold-call potential customers, find common ground, and close a sale.

I didn't have that kind of personality, I'd often tell folk. I'm not magnetic enough to convince people to buy stuff. And, even one rejection would be heartbreaking.

Given the situation with my novel, I'd best learn how to close sales. Like many others, my father used to tell me "be open to learning new skills, either at your current job or in prep for your next one." So yeah, at once doing this was thrilling and chilling. It would be something I've rarely attempted, and at which I'd never succeeded.

It was me, and my product. It's pretty direct motivation. There was still that reluctance to absorb a shootdown, but here goes.

Before heading out, I had one pretty solid lead and one "possible" (for those who play spades with a partner & bid the number of books you're sure you can get, that kind of "possible" is what I mean).

The solid lead was a Christian bookstore near my house. The young, bespectacled guy at the counter was nice enough, but the manager wasn't there. They'd have to call me back another time. I left my business card and left. On the way out, I noticed all sorts of books on the shelves. I envisioned multiple copies of my novel alongside these other publications.

The "possible" was a bookstore several miles south of my first stop. The second store was a fast-food place in a previous incarnation (I'd eaten there before).

Once I got inside, I realized my "possible" was highly improbable. The lady behind the counter was nice, but they weren't in the market for what I'd offered. This second bookstore sold Bibles and Biblical resources. In addition, they had a nice selection of robes, clerical-collared shirts and other church support products.

She also informed me they weren't staffed to do any marketing (though I assured her I'd take care of that.) She was nice in her warnings, letting me know that their story and my novel wern't a good match.

I left the counter lady a card as well, bid her farewell, and booked out yet again.

So far, I didn't have any sales, but felt encouraged. By this time, I also felt a bit hungry.

After running an errand, I headed home. There's a nice little bistro-type place near downtown, and they serve great panini. I figured I'd stop in to get one. As I waited for my to-go order, I noticed the bistro had bookshelves on opposite walls. I went to the cashier, asked permission to donate a couple of copies, and waited for an answer.

She gave it some thought, reminded me that their books are for loaning. And, they never bought books for their displays. It was donations only. Sometimes, customers return books. Sometimes, they'll recommend a book. Sometimes, the owners will note feedback from reader/customers.

Since I'm riding around with product, it was a no-brainer to go get a couple of copies to leave at the bistro.

(Aside: I'm still trying to figure out the calculus of how many copies to give away to stir up more sales. I'm guessing a number between one copy and halfway to infinity may capture the number I seek. This will take more study.)

After spending the morning driving around, I feel invigorated. Even without actual sales today, I'm in the game. I imagine it's kinda/sorta like a minor leaguer called up to Major League Baseball. My debut looks like an 0-for-2 in the box score, but I wasn't over-matched in either plate appearance.

Tonight, I can put on some baseball in the background, hit up the Google machine, do some more recon about possible bookstores to visit, and work a game plan. This is a challenge, one I've never faced. But I look forward to it. Tomorrow is another day to get in the game and take my swings. More to follow...
Posted by Some Random Old Dude at 12:09 PM No comments:

Yeah, I'm back - introducing "None of Our Hands Are Clean" 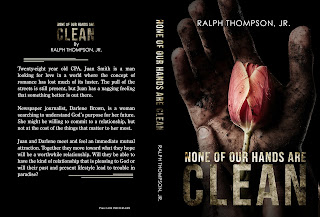 "But you said that before." Yeah, I can't deny I got...distracted.

Above is the first pic I've ever posted. It's the full cover from my debut novel, "None of Our Hands Are Clean." It's available all over.

My first tagline is " A romance...for the rest of us." You can find it on the following websites.

As always, I appreciate deeply those of you who've already bought it, read it, enjoyed it. For those who haven't yet, check it out.

In this space, I'll share the things I've learned getting this published. In addition, I'll also share some stuff about upcoming works.

I won't need a year to create the next post.
Posted by Some Random Old Dude at 8:32 AM 3 comments: